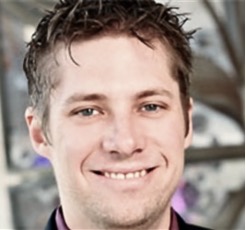 The demand for smaller sized electronic devices – for use in computers and cellular phones, with improved functionality – has forced not only the sizes of the constituent components of semiconductor information processing to rapidly shrink, but the operational frequencies to increase. The required increases in device performance have led traditional semiconductor device technology to reach fundamental, and perhaps ultimately insurmountable, limits of several key quantities, namely: size, weight and power (SWaP).

Within this context, the shift towards device operation that exploits quantum mechanical principles is often viewed as a panacea. Of the proffered cures to the SWaP conundrum, none garners more attention, and is shrouded in more mystery, than quantum computing. Quantum computing offers the ability to potentially solve heretofore unsolvable problems in areas ranging from drug design to global warming by exploiting quantum mechanics.

Prof. Matthew J. Gilbert is a Visiting Professor at the Center for Memory and Recording Research at UC San Diego, and an Associate Professor in the Department of Electrical and Computer Engineering at the University of Illinois at Urbana-Champaign (UIUC).  He is affiliated with the Micro and Nanotechnology Laboratory, the Department of Physics and the Institute for Condensed Matter Theory at UIUC.

His research broadly focuses on theoretically elucidating new phenomena in emergent materials with the goal of developing new types of next-generation information processing systems. The majority of his current work revolves around understanding the properties of topological materials, including insulators, semimetals and superconductors, with the goal of understanding their potential role in high-frequency, electronic, magnetic and quantum computing applications. He is also the founder of a startup company that works to design topological metamaterials for high-frequency device applications and is part of the Department of Defense advisory group on topological electronics.